The Large Binocular Telescope (LBT) is a unique optical-IR telescope deploying 2 primary mirrors of 8.4m on the same mount. The two secondary mirrors are deformable thanks to 672 actuators each, making the LBT the first adaptive telescope in the 8-10m class.

Four focal stations are provided with pyramid wavefront sensors that analyze the light coming from a guide star, measuring the aberrations introduced by the turbulence.

Wavefront sensor and the secondary mirror compose the adaptive optic system able to correct in real time the atmospheric turbulence, providing extremely sharp and deep images. In 2010 the First Light AO (FLAO) system has been deployed at the LBT, providing the first extreme AO correction in the Near InfraRed. 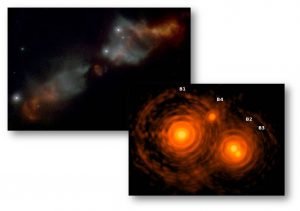 Currently, 4 Single Conjugated Adaptive Optics (SCAO) systems operate routinely for science operations at LBT. Two of these SCAO systems feed the interferometric focal stations of LBTI, while the other two provide the correction for the two LUCI:  NIR spectro-imagers.

The SOUL project is upgrading these 4 systems. The core of the upgrade is the replacment of the current wavefront sensor camera with Electron Multiplied CCD (OCam2k by First Light). The full system upgrade will provide a faster loop framerate (up to 2kHz) with a very low read out noise: 0.4e- instead of current  10e-. Moreover, the correction bandwidth will benefit of the reduced time delay (from 2.7 to 1.8ms). All these elements will provide better rejection of wavefront disturbances, and a higher spatial sampling (40 instead of 30 sub-apertures on the pupil diameter) for an improved reduction of aliasing error. The gain in limiting magnitudes is estimated to be between 1.5 and 2.0 across the whole range of reference star brightness (7.5 < mR < 18).

This improvement will open the SCAO correction to a wider number of scientific cases from high contrast imaging in the visible to extragalactic source in the NIR. SOUL will feed the 2nd generation of instrument like SHARK-VIS, SHARK-NIR and iLocater.

SOUL has been approved and  funded as second generation instrument by LBTO in summer 2016. The first upgraded system has seen the first light in September 2018 and, currently, the team is working on the commissioning of the LBTI and LUCI AO systems on the SX side of the telescope. In 2019 the 2 systems of the DX side will be commissioned and, in 2020, SHARK-NIR and SHARK-VIS will start their comissioning, fully exploiting the SOUL potential.